Most of Friday was spent doing some crazy documentation at work. So come evening, I picked up a few beers & started planning the weekend! Saturday was Rachita’s (my wife) birthday so the plan was  around her & Sunday was going to be basic chores – Astro’s, our little baby cocker spaniel’s, bath, family lunch, visit to the chopshop & general lazing. So now the POA was crystallized.

View on our Bike Date!

Saturday morning kick-started at 6:00am with Rachita & my first bike ride date in 15 years! Yup never had we ever gone on a bike double-seat. We rode past Worli Seaface to Nariman Point & back; she was a bit nervous from time to time basis her apprehension about riding bikes, though, after a bit things were better. We felt a bit like college kids, we also tried to sit like they do in the movies where in the girl holds the guy from behind, though Ra said it was uncomfortable considering the same was straining her back. All in all, we had fun & the day had started off on a great note! 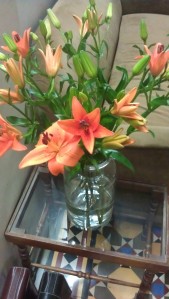 Post bike ride, we got home, took the car & Mihir (my twin brother) & left for Dadar flower market to pick-up flowers for the Mrs. Mihir wanted to do some photography so he came along, though once we reached there, cops patrolling the streets didn’t allow him to click pictures and asked him if he had permission to click the same…..WTF is that? Anyways, he snuck in a few shots! We bought some awesome tulips & liliams & got back home. Post arranging flowers & finishing a shower, etc. we left to pick up a watch for the Birthday girl which Mihir was going to gift to her. We picked up a nice one from SOBO Central Mall; then went to Mainland China for lunch & came home for some nap time.

Evening was spent making some awesome red velvet cupcakes with a cream cheese frosting & some Spinach and Cottage cheese bake for the evening party with the families. Party celebrations went on in full swing & too much fun became! 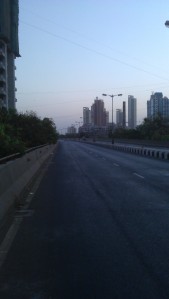 Sunday morning, as always, started of with a brilliant bike ride past byculla bridge, lower parel flyovers. I then spent the morning with Astro – his oil massage, bath, brewed some beer (will write a post on that shortly) then watched Supernatural & started Spartacus 3 which was toally brilliant. Post which, I left for the Chopshop with Mihir to get some work done on the bike & get new customized seats. It took about 3 hours to get the seat customized, though was totally worth it. I also got some investigation done around getting a silencer which will give the bike a dual exhaust. Also found out details for the eagle bike which Jayeshbhai at the chopshop was trying to sell to us. Got home, had awesome dinner, watched Mission Impossible Ghost Protocol which was toally entertaining, had some amazing red velvet cake which was left over & then passed out.

Woke up to the same thought as the last 2 weeks I miss the weekend & i hate Mondays. This time though, there is much to look forward to as next Monday I have put in a leave and Tuesday is a Holiday! Now planning the extended 4 day weekend with the gang…

Seat has been Customized...