Saturday started off with a rare and early morning bike ride… Rare basis the rains wherein this time around in the country it is the monsoon season & thus due to consistent rains in the city, bike rides are few & far between. There are people who do ride in the rains, though Mihir & I totally refrain from the same….. to each his own, I say… Coming back to the bike ride – an amazing feeling when you just start the engine, put the bike into gear and start cruising; somehow, even after a break you just feel like the bike is a part of you and the feeling is unmatched. A bit like cycling – you never forget how to ride it 🙂 .

Fortunately, the weather was kind…… actually, the weather was spectacular….. roads were dry, nice wind, the sun was under a cloud cover & all that jazz. Started by riding through my lane & then ventured to ride towards Worli Seaface. Passing Peddar Road & then Haji Ali which is my most favorite stretch to ride past was an amazing feeling, then went upto Worli Seaface where the wind was strong & at times felt the push of the same across the bike. From there, decided to go back as there was a slight drizzle which had started, though by the time I reached the Race Course, the weather was clear again. Decided to then continue the feeling of non stop riding & rode towards Marine Drive which was super awesome! Went to Nariman Point & back home. The brilliance of open roads matched only with the experiance of riding next to the sea was super cool!!!

Got home, finished morning chores and then decided to head out for lunch with Mihir, Rachita, Yooti & Mother-in-law a.k.a. JKD. The cuisine to be eaten was Chinese & the place agreed upon was Asia 7 at the Palladium,  Phoniex Mills. Went there did a bit of window shopping & then went and ate some awesome food. Had some raw Papaya Salad, soup which had a distinct thai flavour (coconut milk base), some awesome mushroom starter followed by Rice & some Vegeteable Gravy. The place is a bit steep but definitely worth a visit. Went home & crashed. Though, while I was asleep, the very lovely Mrs baked some awesome cookies; woke up to sensational visuals & smells of the same. Cookies were vanilla, Chocolate & Chocolate with a soft center of Chocolate Truffles… Also Yooti had made some great Apple & Orange Sangria which was drunk through the evening by Vishal, Mihir & yours truly :-). The brilliant evening was then ended with Tacos and the Chocolate soft center Truffle Cookie for Dessert. Also, watched the animated movie Arjun which is a Disney movie though made by Indian companies like Tata Elixi & Reliance. The movie’s look & feel was breathtaking & the story captivating. I highly recommend the same to all. 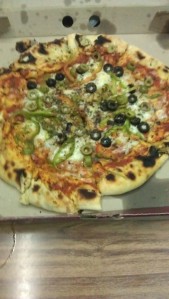 Sunday started off with Astro’s walk, bath & breakfast, post which the day was spent lying on bed watching movies. Saw a movie called The Philly Kid to start the day, loved the tag line of the film which said “To be out he had to be in”. The movie on the whole was decent & worth a watch. 2nd movie watched was Hijacked, starring UFC legend Randy “The Natural” Courture….. total wall paper movie which had its moments :-). Also ordered some wood-oven pizzas from this local joint called Govinda which is a restaurant run by the ISKON Hare Rama Hare Krishna Trust. The food was decent, though my suggestions if you ever order from there please re-heat the pizzas before eating… Finally, to end the amazing weekend, saw The Journey to The Mysterious Island starring Dwayne “The Rock” Johnson. Full on on entertainment movie. After that saw an episode of True Blood and finally passed out…