It’s been 36 years now that I have been staying in Bombay (Still can’t get around to calling it Mumbai). In all these years I have visited all the popular landmarks in the city, but never got around to visiting the Haji Ali Dargah – the main reason for this – it was damn scary to go there, it’s in the middle of the sea! Last weekend, I had decided to go on a photography walk to Mahalakshmi Mandir; the same eventually moved on to a Dargah walk below are some details of how that happened.

Like with all Sundays mornings, I woke up an

d lazed in bed for a while; eventually realized that I have to catch early glimpses of Mahalakshmi Mandir and jumped out of bed, called Milind (twin brother) who was on his bike ride to come and fetch me. We then went on a wild goose chase to find a location to shoot pictures – Marine Drive, VT, Walkeshwar, Grant Road Vegetable Market, but no real luck! Some places were overly crowded with cops, others were shut. Finally, I asked Milind to drop me to Mahalakshmi; note, I always knew I wanted to go there but I wanted a bike ride also. On reaching the Mandir, I realized that it had pretty much remained the same; I had come there about 10 years back to fix lights on the Mandir (I used to do that a few years back) – the same florists, Pand

its sitting to get aarti done, etc. What has changed was the stairway which led to the Mandir – it’s like a secure cocoon, metal detectors, overhead cover, etc. This kind of put me off, I took a few pictures but then walked out. 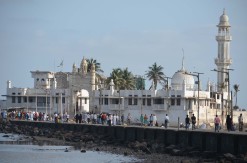 While leaving, I thought I don’t have a picture of the Haji Ali Dargah so decided to brave the early morning sun and walk towards the Dargah to capture a few shots. On reaching close to Haji Ali Juice Center, I realised there is a small lane that I have never actually seen, I walked forward into the lane and saw a whole bunch of cops; a little worried by now about whether they will allow my camera in or not? To my surprise, it was smooth sailing. I walked down a path and realised this is the road that cuts through the sea towards the legendary Hajil Ali Dargah, major excitement happened in my world – this was an unexplored path for me. As I moved forward, I realized there was a low tide and hence safe to walk ahead (Note I have always had this fear) my immediate reaction – the road was like a flea market, owners were just opening their shops, but they were selling everything: bags, rubber bands, holy floral s

heets, books and so on. By now I had gone trigger happy shooting everything and anything. I reached the middle of the road and realized I am on the opposite side of the city; this is something everyone must experience once in their life – the view is spectacular – cityscape on one side and the ocean on the other. Amazing! After a longish walk, I reached the Dargah, did not take any pictures there, and went in put a Chaddra on Sayed Peer Haji Ali Shah Bukhari’s Dargah, bowed my head in respect and sat there for a few minutes. Trust me, the world slows down and you feel peace like you have never felt.

Some history on this awesome Heritage monument: The Haji Ali Dargah was constructed in 1431 in memory of a rich Muslim merchant, Sayyed Peer Haji Ali Shah Bukhari (R.A.), who gave up all his worldly possessions before making a pilgrimage to Mecca. Hailing from Bukhara, in the ancient Persian Empire and now in Uzbekistan, Bukhari travelled around the world in the early to mid 15th century, and then settled in Mumbai. Haji Ali left this world during his journey to Mecca and miraculously, the casket carrying his body, floated back to these shores, getting stuck in the string of rocky islets just off the shore of Worli. Thus, the Dargah was constructed there. Good people, if you have not visited this monument, I suggest you drop everything and go there. It’s an experience you will not forget.