This week was the rains, so no bike ride happened 😦 bummer… Primarily, the monsoons here in India, specially in Bombay, aren’t conducive to bike riding; there is decent amount of water logging, also traffic’s a bitch and roads are as slippery as icy glaciers… Having said that, if you are planning on getting your bike out during the rains, whether out of choice or duress, some basics you need to keep in mind. (Also images are not of the weekend but of past rains and how they are a problem year on year)

1) Have your tyres checked for the right amount of air

2) Get tyres with better grip for the rains

3) Buy a good windcheater or raincoat

4) A good cover for the bike

6) Have a tool box & first aid box handy so that in an emergency, if at all, you are equipped

7) Have the engine oil and brake oil also thoroughly checked

8) Carry a dry towel or napkin at all times

Moving on, Friday evening was generally an easy one wherein Rachita & me watched some serial on TV, had a nice Family dinner & closed the day. Also it had been a tough day at work so didn’t do much even though it was a Friday. Saturday morning started off with a bang, having my favorite cold coffee with some super bailey’s irish cream and chocolate sauce (Recipe for the same below). Also, as mentioned, no bike ride happened basis rains, so then decided to watch movies and chill through the day – pulled out the entire Bourne series from my collection; the POA was clear then to laze & go through movies & eat awsome food.

For people who don’t know, the Bourne series is about Jason Charles Bourne (born David Webb), a fictional character and the protagonist of a series of novels by Robert Ludlum and subsequent film adaptations. He first appeared in the novel, The Bourne Identity (1980), which was adapted for television in 1988. The novel was very loosely adapted in 2002 into a feature film under the same name and starred Matt Damon in the lead role.The character has appeared in eight sequel novels (the last six were written by Eric Van Lustbader) with another due to be published in 2012. Along with the first feature film, The Bourne Identity (2002), Jason Bourne also appears in two sequel movies, The Bourne Supremacy (2004) and The Bourne Ultimatum (2007), both with Damon again in the lead role. A fourth film, The Bourne Legacy, is due to be released in 2012 but will not star Damon – the concept & story is about a black-ops agent gone rogue against the corrupted government system. 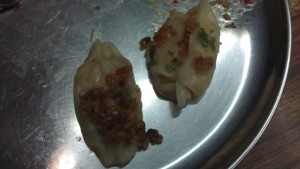 Post the marathon movie session, awesome dinner cooked by Rachita was had. She made some awesome dimsum/momos & rice noodles with chinese greens which were totally spectacular! Sunday morning started getting the bike cleaned, though, couldn’t go for a ride as the rains were just not letting up. Spent the entire day lazing in bed, watching serials. Finished Vampire Diaries season 3 which was super fun! There is no one more cooler than Damon played by Ian Somerhalder… Again for dinner, Rachita made some awesome Omelet Pav I(Omelet Bread) which was the greatest in the world! In the posts through the week, I will be sharing the recipe for the same and also an interesting article on why this preparation is so iconic. Finished the day watching Supernatural and finally called it a day.

2) Add some sugar to the same and drop the same in the mixer.

3) Post mixing the same, add 30 ml of bailey’s irish cream to the mix & give it another stir.

4) Finally top the mix with a generous helping of chocolate sauce.

5) The super duper coffee is ready.