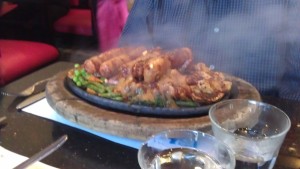 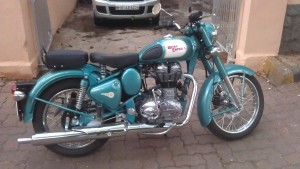 This weekend was pretty crazy, with a lot of things happening beyond the normal R & C (resting & chilling). Beyond thee pictures attached, do also check out the slide show below for all the brilliant & yummy pictures. Started off the same early Friday afternoon, wherein post work from our fort office, Vishal & I decided to head to Mocambo’s which is a restaurant opposite our office and have a few pints. Reached there, zeroed in on Miller, which we had drunk in Goa, though now the same was in Bombay so happiness happened! We had a few pints; from there, we decided to head to Kobe’s for lunch. Mihir & Rachita also joined us for lunch. Sizzlers were had which were pretty awesome – Sausage Sizzler, Hamburger Steak Sizzler & Nasi goreng which is a rice based Sizzler were devoured. Post this, we finished some work and then were going to crash at our relevant homes. Please note, Ekta wasn’t there as she was in Sanpada and post that was heading to Baroda. In the evening, I got a call from Ekta saying she is not going to Baroda and that she will be going the next day on her bike… Full on drinking session happened post that with Rum & beer, post which we passed out. Ekta got up the next day by 4:00 a.m. and left for Baroda. 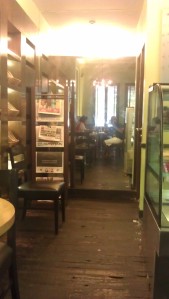 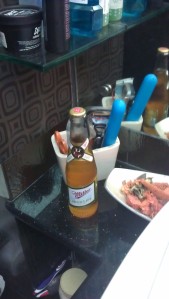 Saturday morning started off with deciding a brunch date with the Mrs. We decided to go to Colaba & then figure a place to go and eat. Post loitering across Colaba Causeway we decided to go to Basilico. Reached Basilico by 11:30 a.m., the place was pretty empty. Rachita ordered a Ginger Cooler & I had some Orange Pekoe Tea (Yup! I had tea, as Basilico doesn’t serve Alcoholic Beverages); also by then we had called Anushka & asked her to join us. While waiting for her, we ordered a Cajun Chicken Salad which was superb! Once Anushka aka Anus arrived, we bitched about a lot of general things and then ordered some Chicken & Steak for our mains. Also ordered some insanely yummy Pizza & finally ended the leisurely brunch with a New York Syle Cheese Cake. For those who don’t know the difference between Philedelphia & New York Cheesecake, Philly is Baked while NY is steamed :-). The afternoon was spent sleeping, woke up and then went for an awesome bike ride past Marine Drive & Nariman Point, got home & figured Rachita had made some awesome burritos for dinner. The dinner spread was awesome – there was sour cream, guacamole, salsa, refried beans & tortilla’s for dinner. Also to top all of that, Rachita made some super duper cheesecake (eggless, that too!). Post the crazily awesome dinner, we watched a few episode of Game of Thrones Season 2 & passed out. 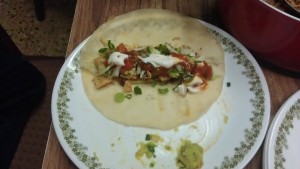 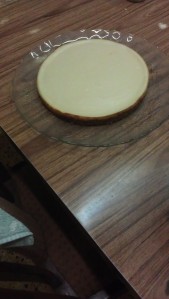 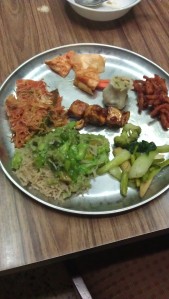 Sunday morning started off with Astro’s walk, then bath as always. Then there was a session of personal grooming in the bathroom, accompanied by some dhinchak regional music. Played a session of Sleeping Dogs on the Xbox360 with Mihir before heading to the inlaws for brunch. Please to note, Rachita had baked cheesecake for the brunch as well :-). There were some awesome dosas made for brunch which were eaten; again, overate so went home and passed out. Woke up, went for bike ride, which was superb considering Sunday evenings Marine Drive & Nariman Point is always packed with people so sights & sounds were ever so intresting. Came home, played NBA2k12 & UFC Undisputed on the Xbox360 while listening to some Blues & Jazz by Muddy Waters, BB King & Eric Clapton. Dinner was some chinese ordered from China Gate at Atria Mall. On the ordered list was some Hunan Wanton Soup, Crispy Fried Potatoes, Burnt Garlic Pot Rice, Shezwan Mein foon (Rice noodles), Sui Mai & Stir Fried Chinese Greens. Post dinner, watched some UFC on Sony Six & finally ended the day with a few episodes of Game of Thrones season 2. Woke up Monday morning, realized the weather was good and went for a bike ride & some photagraphy which is featured in the slide show below. All in all, a great weekend which has set a precedence for the others to come 😉

Posted by badbikegang on September 17, 2012 in Trips & Rides 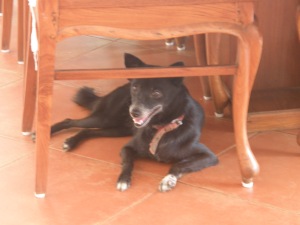 This post is a continuation of the first 2 as the header suggests. Intitially, I was not going to be adding this one & the Goa Getaway Part 2 was going to be the last basis our trip; however, basis the last 3 days spent in Goa this post just had to happen. 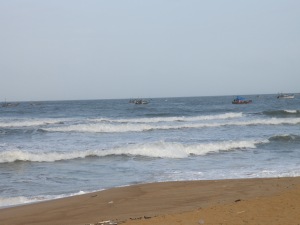 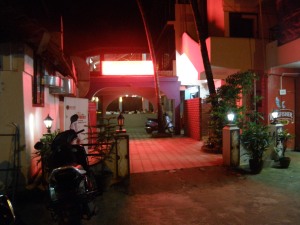 Best Place to Eat in Goa!!! 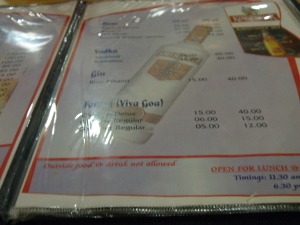 So post the 4th day in Goa where we decide to extend our vacation super excitment time had happened! Immediately, we went and bought booze food, etc. etc. Also jumped into the pool & vegged there for a good few hours post which, basis a recommendation from our Villa manager, we decide to go to Florentine, a local joint, which according Henry serves the best Chicken Cafreal in Goa! Also, by now, we had a new bike added to our list of Activa & Avenger which was the Yamaha Frazer. So come dinner time, I decided to try my hand at riding the Yamaha. The same had a very differnt feel compared to the Avenger which I am so used to, also the gear system which is totally different – 1 down the rest up. Felt kinda like Valentino Rossi on the same, though was riding at a snail speed trying to get used to the system. Post reaching Florentine, realized this was a classic local joint with cheap food & alcohol, considering their cheapest drink on the menu was at Rs 5/- for the local fenny. Ordered loads of food – Chicken Cafreal, Vindaloo, Egg Curry & Loads of Papads – devoured all of the same, had a few drinks & for about 8 people and loads of food paid only Rs.1400/- which is simply spectacular. Everyone visiting Goa has to try this place – it’s got the best Goan food ever!!!

Next morning, Ekta, Aashay & me who were up early decided to go for a bike ride 🙂 Ekta was riding the Yamaha, I was on the Avenger & Aashay was riding the Activa. We decided to head towards Aguada Jail road and take a detour towards the Helipad, further to that road there is a dead end which has a small lane which allows you to ride your bike towards the edge of a cliff which overlooks the sea and is simply brilliant!!! (Check the Gallery Below for some awesome Pics of the Bike Ride) 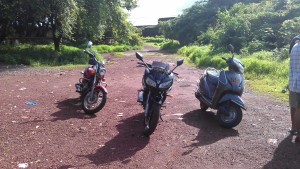 The view from the edge compares to nothing you have ever seen… also the feeling of peace, tranquility & all that jazz is absolutely & totally sensational. Rest of the day was spent sleeping. In the evening we decided to go to a pub on the road to Taj Vivanta called Charcoal & Cheese – had loads of our Goa drink which was invented there (Goa Drink is Rum, Thumbs Up, Loads of Ice & Chat Masala…. totally Ulti Bakka). Post that, we decided to head to the Park hotel which had a ladies night where drinks for ladies were free! Went there, chilled for a bit & decided to come back the next day as the ambiance was super and also we reached at 9:30 pm and the place shuts at 10:00pm for music; some new crap policy by Goa police to shut blaring music by 10:00pm everynight, preposterous I tell you… 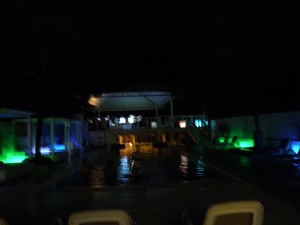 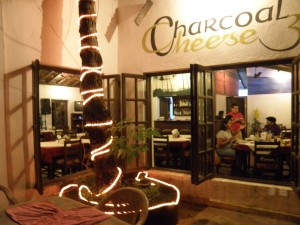 Next day, which was our last day in Goa, finally, was spent lying in the pool to start the day, heading for a bike ride; further to the same mandatory nap happend after which Rachita, Aashay & I decided to head out and finish some shopping. Enroute we realized suddenly Goa had become extremely packed with tourists and was quite a buzz, post quickly picking up some hairbands & crocs we decided to grab a bite at Britto’s… by then Ekta had also joined us. We entered Britto’s & in the same breathe exited after seeing the crowd which comprised of grannies & little kids (horrifying i tell you absolutely horrifying). Though by now we were hungry, so went to this place called “La Pub” which is on the way to Britto’s, ordered our Goa drink fix, also ordered some superb Sausages Wraped in Bacon &  Non Veg Platter which was brilliant. Post this, it was early evening so we decided to head to the Park for some general chilling. Reached there, saw the brilliant view on the beach, the breeze was spectacular, add to that some fun music & crazy ass drinks :-). Most of the evening was spent dancing with Aashay, Ekta & Vishal. Rachita was also there though she was sitting and enjoying her sheesha. Post a crazy evening & night, went back to the villa & passed out. Next day woke up early and then proceeded to drive back to Bombay. Left at 6am from Goa and was home by 6pm in Bombay… Also a special mention to Moti (our adopted dog in Goa) who was totally suffering from ADHD, though was very lovable and super cute. She spent a good deal of about a week living in the villa with us and following us evreywhere including inside the Park Hotel. Shout to Moti to end this article “we miss you :-)”